If I’m to be perfectly honest, I typically find the concept of natured-themed slots to be somewhat boring. While I appreciate nature, I just don’t think it necessarily makes for a very good slot theme. Give me a fantasy slot like The Sword & The Grail any day! By all measures the game has attractive graphics portraying North American wildlife. Unfortunately, I am spoiled for 3D slots from Betsoft and there is none of that here!

Where I do start to get excited, really, is with the extra spins feature for two reasons: pay both ways and the 2x win multiplier. This is likely where we’ll be able to collect the biggest wins unless of course we’re lucky enough to collect 5 wilds on the same payline. The high volatility, with payouts of up to 20,000x, makes sense for players who can handle the higher risk.

As far as high volatility slots go, this is not a bad game and comes with some pretty broad features. Players really into nature themes might want to take a closer look at this one.

Wolf Moon Rising is a high volatility slot from Betsoft.

The moon is full and the wolves are out tonight with Wolf Moon Rising from Betsoft. The slot is a 5-reels and 25 paylines, nature-inspired game that invites us to “dream big, win big.” It features extra spins with 2x multipliers, wilds, special scatter symbols and the Double Up Feature. The dream of every player who engages in play here will be to tap the maximum potential payout of a whopping 20,000x!

The call of nature

Wolf Moon Rising is an August 2019 release from the developer Betsoft which is based on a North American nature theme of forests, mountains and wild animals as Northern Sky. The high-value symbols include two different wolf images which pay out with as little as 2 per payline. The mid-value symbols consist of a bald eagle, mountain lion and bison. Finally, as is typical with slots, the standard-value symbols consist of six royal flush poker symbols.

The audio effects, including the soundtrack, are spirited and help to build excitement. Listen carefully and one will hear the sound of wolves howling.

The slot has an RTP of 96.53% and bets can typically be varied from £0.50 to £5. As with most modern slots, this one is designed in HTML5 to support desktop, Android and iOS platforms.

The elemental wild symbol acts very much like a joker, substituting for all the other symbols with the exception of the wolf moon and the feather talisman. The wild symbol is extra special because it is the highest-paying symbol when it forms an exclusive payline win. It can reward up to £50,000 with five symbols using a maximum wager. As with the high-value symbols, the wild will also pay out on as little as two symbols on their own winning payline.

The wolf moon symbol is a scatter that may appear in any position. It is a special symbol because each instance will award an instant cash prize equivalent to our bet.

Seek and perhaps one will find feather talisman symbols which, in quantities of 3, 4 or 5, will award cash of up to £25, £100 or £500 respectively. If we succeed in landing 3 on a spin, then we unlock 12 extra spins with a 2x win multiplier. Furthermore, we’ll find that the extra spins are pay both ways which increase the odds of winning. The drawback is only that the feature cannot be re-triggered while it is active.

The final feature is called the Double Up Game which is triggered after a regular game win. This gives us a 50-50 chance of doubling our winnings after a particular round. This feature is optional and if we do choose to play then we can gamble all or 50% simply by choosing heads or tails on a coin spin. 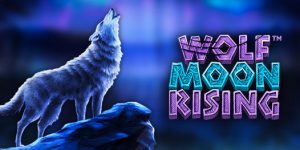 Wolf Moon Rising is a high volatility slot from Betsoft.