Aurora Wilds slot misses a glorious opportunity to dazzle us with breath-taking nature imagery. Take a look at Wolf Moon Rising from Betsoft, and you’ll understand what I mean. The bonus wheel brings back memories of other iconic Microgaming slots like Mega Moolah although the jackpots here are not progressive and this slot falls fall short of this 2006 homerun by the developer. The game does have a maximum jackpot payout of 2,000x but the odds of triggering it will be remote so realistically, expect a maximum closer to 25x total bet per payline. The slot feels a tad like a missed opportunity for Microgaming, but is by no means one to avoid.

Aurora Wilds is a medium volatility slot from Microgaming.

Aurora Wilds: Spiritual side of nature

Aurora Wilds slot is a 5×3 grid and 10 pay both ways paylines slot based on themes of the Aurora Borealis, native North American spirituality and nature. Designed by the independent game studios developer Neon Valley Studios exclusively for the Microgaming network. Aurora Wilds represents the first live game for Microgaming.

The slot embraces Native American spirituality through five artistic animal symbols of a bright and colourful bird, moose, turtle, fish and rabbit. The reels are transparent, which allows players a blurry view of the background of trees, mountains and of course the Aurora Borealis. The top two symbols are the BAR and lucky 7. The soundtrack probably does a better job of reinforcing the slot’s theme as compared to the background artwork which was a little underwhelming. This is a medium volatility slot with an RTP of 96.20% which will likely require a higher bankroll to play longer. Bets can be varied in amount from £0.10 to £60. You can play the slot on desktop, Android or iOS devices.

Looking at the features, the first thing that we note is that wins pay both ways either from left to right or right to left. This significantly boosts the odds of winning since we’re only talking about a 10 paylines slot.

Expanding wild symbols may appear on the second, third and fourth reels and substitute for any of the other symbols except the jackpot trigger symbol. When a wild appears on any space, it will expand to cover a reel if it can create a winning payline. A bit surprisingly, the wilds are a bit hit and miss and don’t always have the highest of hit rates so we may be waiting a while between appearances.

After at least one expanding wild lands on the reels and wins are calculated, a respin is awarded with the expanded wilds locked in place. A further respin can be awarded, up to 3 successive times, if an additional expanded wild appears.

A jackpot wheel image may appear to the bottom right of ordinary symbols, with the exception of the wilds, on the second to fourth reels. Three of these symbols will gain you entrance into the Jackpot Wheel room where we’re guaranteed a Grand, Major, Minor or Mini win. Here we can win 2,000x, 100x, 50x or 15x our total wager. The jackpot wheel is difficult to trigger so expect that it will take a while and remember we are far more likely to win the Mini Jackpot than we are to win the Grand. 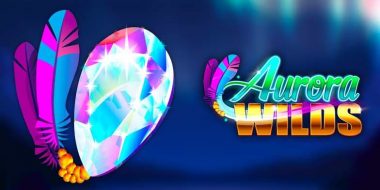 Aurora Wilds is a medium volatility slot from Microgaming.