Game King’s™ Jacks or Better is one of the most well-known varieties of video poker on the internet and has become one of LadyLucks’ most popular games. Available on your mobile and tablet on the go, playing Jacks or Better video poker has never been easier.

Jacks or Better by Game King™: Jackpot video poker for your mobile!

In regards to jackpot prizes, by playing with the maximum coins available you can look to take home 800x you stake by landing a royal flush. While you might be thinking it’s unlikely to take the jackpot, you can rest assured that prizes for landing a straight flush or a 4 of a kind are still pretty impressive. Ultimately though, there’s a wide variety of prizes available, which we’ll explore in section two.

How to play Game Kings’ Jacks or Better 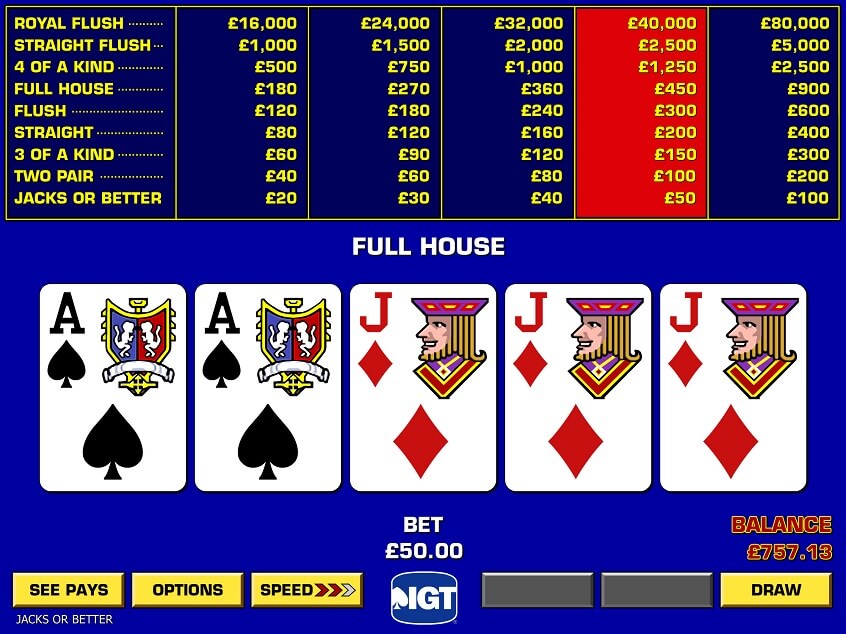 The aim in Jacks or Better video poker is to land the best possible hand – much like in regular poker.

The only crux in this game is that for you to activate wins you need to land pairs of jacks or better.

While this might sound like a reason to avoid this game, just hold your horses! As a result of this the prizes for landing anything above a pair of jacks are greatly increased. While you would only expect to double your stake for landing two pairs in regular video poker, you can expect a 10x return in jacks or better.

Let’s take a look at the prizes in Jacks or Better online video poker below:

You have two rounds in video poker: the first deal and the second deal. During the first deal you’ll be handed five cards and from there you can either ditch or keep. If you decide to ditch you will be re-dealt the same amount of cards, where if you manage to create one of the higher value hands you will be paid accordingly.

By creating any of the hands above, you will be paid the respective payout.

🔍 Where to play the Jacks or better (IGT) – Review slot