If I’m going to play a higher volatility jackpot slot, my first preference would be one with a progressive jackpot such as Mega Fortune. Still, Book of Dead makes a pretty compelling case for itself. I felt the developer did a great job with the artwork and soundtrack. The biggest feature is definitely the free spins with expanding symbol which means that’s where we’re going to want to be. Unfortunately, the free spins are tough to trigger but not impossible, so we’ll need to be patient. I thought the game could definitely benefit from a bonus feature to give it a little bit more variety. Still, the slot has been going strong for several years now and there is a reason for it – 250,000 of them! I liked this slot and think our player community will too.

? Book of Dead is a higher volatility jackpot slot from Play’n GO.

Book of Dead is a jackpot slot for the ages, released back in January 2016, is remarkably similar to Novomatic’s Book of Ra. While I believe in coincidences, I’m thinking that this is not the case here. Regardless, Book of Dead continues to be a very popular slot supported with visually stunning artwork, Egyptian music and simple but effective features.

Book of Dead is a 5-reels and 1 to 10 variable paylines slot from Play’n GO. Its biggest highlight is its 250,000 jackpot top prize!

Based on an archaeological ancient Egyptian theme, the top four symbols include the Indiana Jones-type adventurer Rich Wilde, bird statue of the God Ra, head of the God Anubis and golden mask. The bottom five symbols are the royal flush poker icons which is a little boring, but not uncommon. The soundtrack for the slot is exceptional, helping to reinforce the Egyptian theme. The additional audio effects from triggered features and payline wins got my heart racing.

A player can vary their wager from £0.20 to as much as £50. The mobile slot game has an RTP of 96.21% and a higher volatility. It is also the designed in HTML5, so we can take it on the go using an Android or iOS device. While we can adjust the number of paylines to as low as 1, I suggest all 10 for the best results.

? Play for real at Casumo

The book symbol has the power to act as the wild which substitutes for any of the other regular symbols. It can appear on any reel and in sets of 3, 4 or 5 reward 2, 20 or 200 coins.

? Play for real at Casimba!

Free spins with the Expanded Symbol

The 10 free spins can be triggered with three or more book symbols. The position of the symbols are not important. Prior to the commencement of the free spins, the pages from the Book of Dead reveal the special expanded symbol which is chosen from amongst the regular symbols. Once a payline win has been awarded, the special symbol can expand to fully cover an entire reel if this will help to create a new win. The free spins feature can be re-triggered in the same manner as the original trigger.

Finally, the last feature needing mention is the optional gamble. It is optional because we can either choose to play or collect our winnings and bypass the feature altogether. If a player decides to gamble their winnings, then they have the option of playing either the red-black for x2 their win or they can play the card suit for x4 their win. This feature ends with a wrong guess, on total winnings of 2,500 coins or after having gambled five consecutive times – whatever comes first!

? Do you know ? Book of Dead is the most popular Book of Ra alternative. 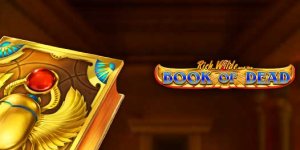 ? Book of Dead is a higher volatility jackpot slot from Play'n GO.

🔍 Where to play the Book of Dead slot