Butterfly Staxx 2 is an interesting game. It builds on the success of the original slot with some marginal improvements. Netent was probably asking themselves why change something that works. The low to medium variance will likely appeal to players with high heart conditions, and the decision to give players a choice between a bonus pick and extra spins, when triggered, doesn’t hurt. My money would always be on extra spins- but hey, that’s just me! As far as themes go, I definitely appreciate that butterfly stories are not everyone’s cup of tea. The payouts are not the greatest at about 240x which may not be that surprising considering the variance. If you’re a fan of Butterfly Staxx then you could easily stick to the original and not lose out on much. If you’re looking for something else with low volatility, then you can check out the classic Netent slot Starburst.

Butterfly Staxx 2 is a low to medium variance slot from Netent.

The original Butterfly Staxx was released back in 2017 and has proved a success for Netent which is why they have followed it up with Butterfly Staxx 2. While some of the features have remained the same, there are some changes. For example, the slot now offers us a choice of either the Butterfly Spins or the Butterfly Frenzy Bonus Pick Features. The slot remains low to medium variance, more suited towards individuals who shy away from higher risk. The game is played on 5-reels and 40 fixed paylines with maximum payouts of up to 240x bet.

The design of the reels is such that they appear to be within a golden frame much like a portrait. Behind, there is an enchanting image of flowers growing along a stone arch with two Victorian-style lamps on each side. The slot has an almost calming effect with subtle music and the sound of birds.

As is the case now with modern slots, Butterfly Staxx 2 has been optimised for play on mobile, tablet and desktop. This means that we will be able to enjoy the game outside of our home using an Android or iOS device.

A colourful flower represents the wild in this game which is available in both the re-spins and base game. It can replace any of the other symbols except for the scatter.

The re-spins feature can be triggered by a stack of Butterfly symbols on any reel. This will induce all of these symbols to flutter away to the left-most position of the same row that is not already occupied by a Butterfly symbol. The butterflies then remain locked in place for the duration of the feature. If by chance, the first and second reels are covered in stacked butterflies then a second play area (grid) is unlocked. Likewise, if the first, second and third reels are occupied by stacked butterflies then a third grid is unlocked.

These two features are probably the biggest change to the game and it would seem that Netent was being generous because they leave it up to us to decide which we prefer. They are both triggered in the same way which is by three scatter symbols on the first, third and fifth reels during the base games. They are both described briefly next.

This feature is played on a grid on which only dormant or active cocooned symbols can appear. It’s the active cocooned symbols that we want because they transform into Butterfly symbols which make their way to the left most position on the same row not already occupied by a Butterfly symbol. They then lock in place for the duration of this feature that is played with three play areas.

This feature may be played in five different stages consisting of different potential payouts. Here, we get to choose amongst Butterflies to advance a stage or reveal cash prizes. 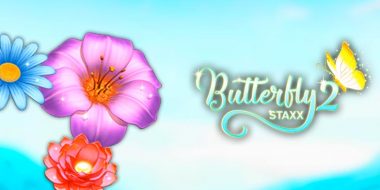 Butterfly Staxx 2 is a low to medium variance slot from Netent.