We can see why Bonanza has been such a big winner for Big Time Gaming! We loved the higher volatility because it offered some great payouts and we liked the innovative Megaways™ feature. In fact, the Megaways™ modifier has become so popular that the developer has licensed it to other developers. At first glance, we found that the game appeared a little complicated, but we later learned that it really wasn’t the case. The symbols were simple and if it weren’t for the more interesting moving parts in the background, might have left us feeling a little underwhelmed. We liked the fast-paced music, which felt like something that you might hear in a spaghetti western or some Klondike gold rush. Our favourite was the free spins feature, which was very exciting, because of the unlimited progressive win multiplier, but we were disappointed at how difficult it was to trigger.

Bonanza is the monster hit from Big Time Gaming (source) which features free spins with unlimited progressive win multipliers, Win Reactions and Megaways. For those of you not familiar with Megaways, it is a pay mechanic which modifies the number of symbols appearing on a reel.

The slot symbols include four precious stones as the higher-value followed by six lower-value royal flush poker symbols. The game is set on the side of a grass and moss covered rocky hill with an animated water wheel to the right of the reels. It includes fast-paced music and some mildly amusing audio effects.

An innovative feature is the four rail carts that carry symbols above each of the middle four reels. These symbols can be used as part of a payline. Winning symbols explode to create a chain reaction where the resulting spaces are replaced by symbols falling from above and, in the case of the rail carts, from the right. We had some fun with the Win Reactions because it triggered regularly and was often a great source of base game wins.

The slot also contains dynamite wilds which can substitute for any symbol outside of the scatter, but you’ll only find them in the carts above the reels.

During the feature, you can add three extra free spins to your total with three or more scatters. On a side note, we also liked how the background image adopts a red tinge which added to the excitement. 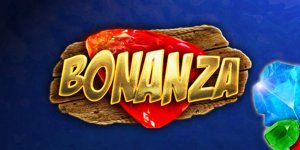 🔍 Where to play the Bonanza slot