LadyLucks’ Brief(ish) History of the Transformers!

Many of you will be aware of the Transformers, and here at LadyLucks we are big fans ourselves. From your favourite toys, games to blockbuster films, the franchise has been successfully running since 1984 and continued to attract a new generation of fans. Here we will give you a lowdown on how it all came about, how it’s changed and what the future holds.

Where it all began

As mentioned, it all began in 1984, when a Japanese firm called Hasbro released a new toy line, and then things really began to kick-off.

Two years later and Transformers: The Movie was released, it would be the first of many and the first chance for fans to see some of their favourite characters.

By 1992 things had really picked and up, with a fan base secured almost overnight.  To maintain their new army of fans (and to attract new ones), Transformers: Generation 2 was released, which were recoloured versions of the original toy.

Four years later, we would see another release of the Beast Wars Transformers, this again would demonstrate how the market would spread.

By 2002 there would be yet another generation of kids who would grow up hooked on the franchise and the all-new and improved Transformers: Armada toys would be released targeting the younger fans.

2004 would see the 20th anniversary of Transformers, a remarkable achievement. To celebrate Transformers: Energon was released and it was yet another way fans could get involved with their favourite toys and characters. 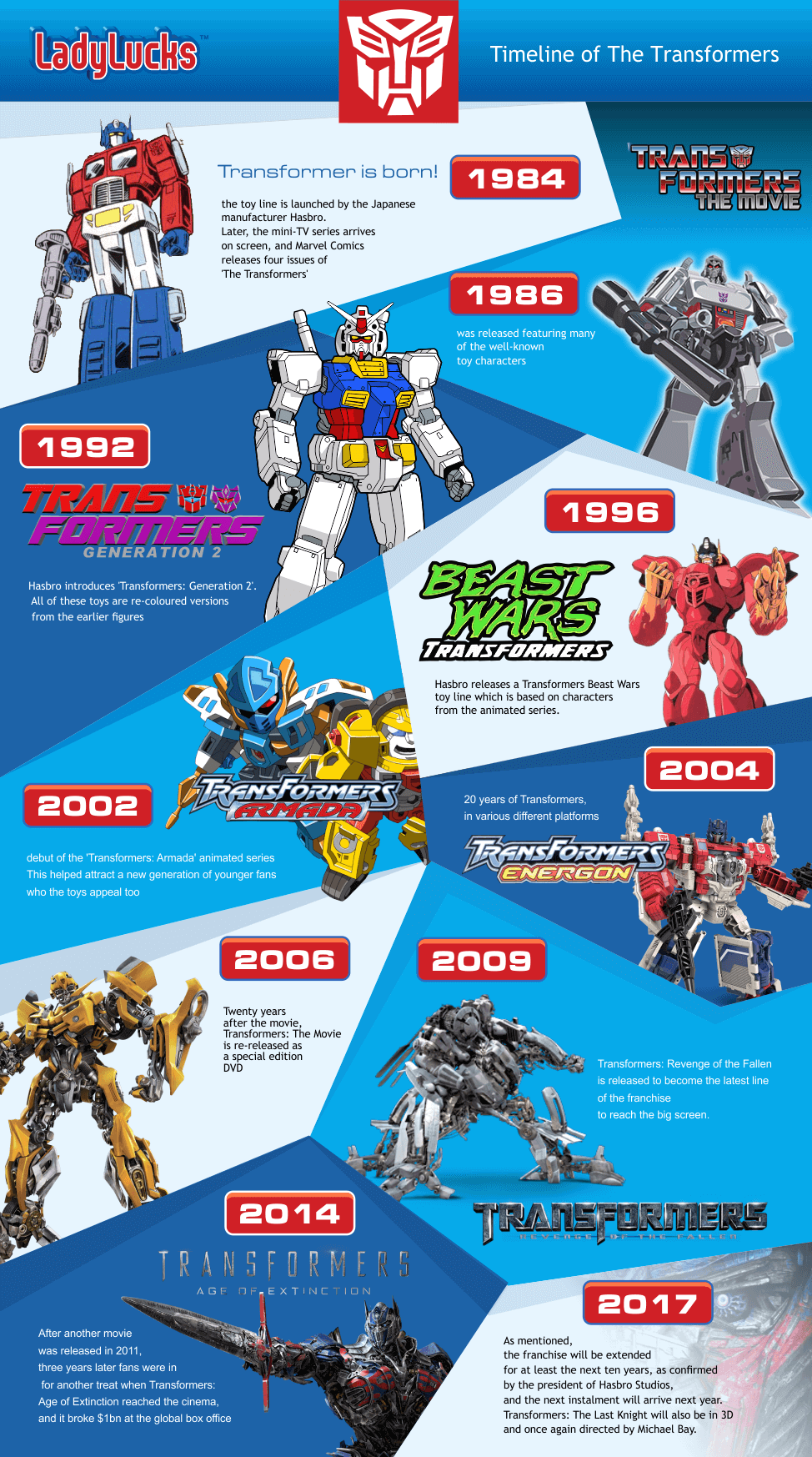 Another landmark was just around the corner as 2006 was the 20th anniversary of the initial movie and to commemoratethe fact it was re-released and available in a special edition.

That was just the start of the movies, as in 2009 Transformers: Revenge of the Fallen became the latest to land on the big screen and capture yet another wave of fans.

The success of the movies meant that they just kept on coming, and in 2014 Transformers: Age of Extinction broke $1bn at the global box office, demonstrating the huge audience that had developed.

With such popularity, there is no reason to stop, and further movies are in the pipeline. 2017 has been earmarked for the latest Transformers movie, The Last Knight, which will be in 3D.

So, there you have it, a comprehensive review of Transformers and how it became a worldwide interest, from toys to movies. Plus, there’s much more to come, with movies scheduled for upcoming years and even a slot for you all to enjoy at LadyLucks. It’s just another way the brand is continuing to grow, and it won’t be stopping soon.

There are 112 others news