To its credit, the slot has solid graphics and a pretty decent soundtrack. There are other audio effects that contributed to the western atmosphere as well.

While I found the slot lacking in features, it is probably worth a peek.

The One Armed Bandit from Yggdrasil has a Wild West theme.

The entrance of a new sheriff could not have happened at a better time! There’s trouble brewing and we need to team up with this bounty hunter in The One Armed Bandit from Yggdrasil. The weapons of choice include wilds, respins and free spins with x5 wild multipliers and up to x20 win multiplier. If we play our cards right, and with a little luck, the payouts may reach up to 160,000 coins on a payline.

The One Armed Bandit: Game Highlights

As Sticky Bandits Wild Return, the artwork paints an image of a town deep in the US south, located in a desert canyon. We can almost feel our skin baking in the heat. The 5-reels and 20 paylines include a flask, pistol, cowboy hat and spur. The previous four make up the high-pays symbols while four playing card suit symbols make up the low-pays symbol. The soundtrack includes a lazy western tune which fits the game to a tee. This July, 2019 release has an RTP of 96.3% and we can adjust the wagers from £0.10 to £40. The game has been optimised for desktop, tablet and mobile. This means we can travel the US south using our Android or iOS operated device.

The Respin Feature is triggered by a scatter symbol in the base game. After wins are calculated, the scatter symbol becomes a wild for the duration of the respins. It is possible to collect up to 4 respins in one spin. Wilds have the ability to substitute for all the regular symbols. They can only appear during the respins or free spins.

Features include respins, wilds and free spins with win multipliers and multiplier wilds.

The One Armed Bandit 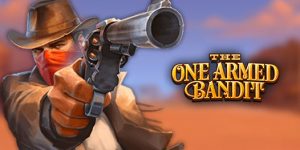 The One Armed Bandit from Yggdrasil has a Wild West theme.

🏆 Top 3 best online casinos for The One Armed Bandit