While the artwork and audio effects are solid, the theme of Asian fruits is a little lacklustre, but players, of course, may think differently. Though short on general features, the ones included do trigger relatively often, so I did not find that I needed to wait too long to benefit from multiplier wilds and extra spins. What I didn’t like was that the wilds only appear on the 2nd to 4th reels and that I couldn’t combine multipliers to boost my winnings from 2x to 4x or 8x.

Generally, I found payouts quite lacklustre and struggled to reach even 20x total bet but not entirely surprised given the low-medium volatility. For what it is, Sweet Honey Fruity is an ok slot, but there is nothing that particularly stands out, and I think that there are better ones out there.

Released in October 2019, Sweety Honey Fruity is an Asian and fruit themed-slot from Netent with features that include 2x multiplier wilds and extra spins with 2x win multipliers. This slot represents a further push by Netent into the lucrative Asian market after having released Twin Happiness in September 2019.

Netent introduces the 5×3 paylines slot based on an Asian fruit theme.

Sweety Honey Fruity is set in Asia amid the familiar style of architecture that we can find in this part of the world. Bound in red, the Chinese colour of happiness, good fortune and success, the ivory-coloured and patterned reels are home to exotic star fruit and dragon fruit, along with watermelon, melon and pineapple. The standard-value symbols are five familiar royal flush icons. While there are Asian-inspired audio effects, we have to wait until triggering the extra spins to enjoy them.

Play the slot on a 5×3 playing area (reels/rows) with 15 fixed paylines. The bets are adjustable from the low end of £0.15 to the high end of £150. Optimised for mobile, tablet and desktop – we can take the game with us anywhere using an Android or iOS device.

The slot has low-medium volatility with RTP of 96.71%.

The wild symbol can replace all the other symbols to help create payline wins. It appears only on the 2nd, 3rd and 4th reels and further acts as a 2x multiplier when taking part in a win. Unfortunately, when the same payline win has more than one wild, the multiplier is capped at 2x.

Features of the game include a 2x multiplier wild and extra spins with 2x win multiplier.

Extra spins are triggered unconventionally. The reason for this statement is that all it takes is payline wins from one of the fruit symbols that can be re-triggered during extra spins play. Collect 5, 2, 1 or 1(dragon fruit only) extra spin with 5, 4, 3 or 2 fruit symbols on a winning payline. During the extra spins, all wins receive a unique 2x multiplier which can combine with a 2x multiplier wild for up to 4x. 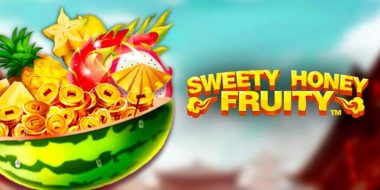 Released in October 2019, Sweety Honey Fruity is an Asian and fruit themed-slot from Netent with features that include 2x multiplier wilds and extra spins with 2x win multipliers. This slot represents a further push by Netent into the lucrative Asian market after having released Twin Happiness in September 2019.