Sahara Nights is an attractive slot from Yggdrasil which continues to be amongst the best when it comes to dazzling us with their imaginative artwork. The orchestral music captures the spirit of Sahara Nights and reinforces this popular tale.

There is not much in the way of features; however, the expanding wilds do trigger frequently and will make a difference in the frequency of wins. While the slot does offer the potential for high payouts, I never did manage to crack 25x total bet after hundreds of rounds of play until I reached the extra spins. My best was just shy of 140x – far short of 3,500x! We can probably do the most damage in extra spins with sticky expanding wilds, but this is difficult to trigger.

Players looking for better payouts from a medium volatility slot might do best to avoid this one. If I were to recommend an original slot with medium volatility, it would be Gonzo’s Quest from Netent.

Yggdrasil introduces the 5 paylines slot based on the story of Aladdin.

Sahara Nights is a September 2019 release from Yggdrasil which features sticky expanding wilds, extra spins and scatter wins. It is one of the stories of the Thousand and One Nights (Arabian Nights) and based on the story of Aladdin and the magical Genie. It has medium volatility and RTP of 96.2%.

The story of Aladdin is about a poor boy recruited by a sorcerer named Maghreb to recover a lamp from a booby-trapped cave. He later discovers that the lamp is magic and contains a Genie. This Genie would help Aladdin to become rich and very powerful. Aladdin would eventually marry the sultan’s daughter. Although there is more to this tale, he would eventually live happily ever after.

The slot has medium volatility and RTP of 96.2%.

The tale of Sahara Nights unfolds like pages from a tome on a 5×3 grid with 20 paylines. The beautiful artwork whisks us away to the palace of Agrabah, illuminated by the moon and starry sky. The sultan is the super high-pay symbol who rewards 175x bet on a payline. The medium-paying symbols include the Princess, Aladdin, dagger and goblet. Finally, the lowest-paying symbols include four different coloured jewels.

The slot can be played with wagers starting from £0.10 to £100. It’s fully optimised for Android, iOS or desktop play, so it goes where you do.

The Genie’s Lamp is an expanding wild that will cover an entire reel if it can guarantee a win. In the extra spins only, wilds become sticky until the end of the feature, and 2 extra spins are added to the total when 3 expanded wilds are on the reels.

Features of the game include a high-pay symbol, extra spins and expanding wilds.

Extra spins are triggered by three or more Book scatter symbols that can arise on any of the reels. The Book is scatter wins paying, where 3, 4 or 5 will award 1x, 10x or 1,000x bet and trigger a corresponding 8, 12 or 16 extra spins. Collect 2 more scatters within the extra spins for an additional 2 rounds. 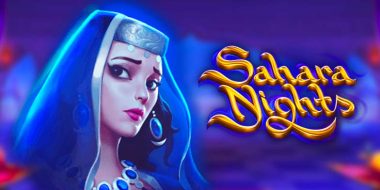 Sahara Nights is a September 2019 release from Yggdrasil which features sticky expanding wilds, extra spins and scatter wins. It is one of the stories of the Thousand and One Nights (Arabian Nights) and based on the story of Aladdin and the magical Genie. It has medium volatility and RTP of 96.2%.